ABOVE: Controlled Excavation at Cahokia Mound 72

STACKS of different point types, and they were all attached to arrows when put in place!

​
Projectile points are named by the first person who digs them up in a controlled context. Most are arbitrarily named after people (usually a landowner), site locations, or their resemblance to other shapes. Good communication between people requires a common set of terms, and naming specific shapes of artifacts with a type accomplishes this. These types are placed along a timeline based on the archaeological record.  In other words, artifacts found by archaeologists buried below other types were deposited first and are older.


This makes type names very useful as they communicate not only the shape of an artifact, but also it's relative age.  When you find broken artifacts sometimes there is enough left to identify it's type. These broken points are significant finds because they establish what types are found on a particular site.  I like to group together and photograph all diagnostic artifacts from a particular campsite as a way of keeping records.

While you can compare your finds to my photos, remember that it's not just the shape that's important when typing points. You should also consider the flaking style (percussion or pressure flaking), type of blade sharpening (beveled or even), notching style, and the presence or absence of grinding on base edges.

Only 65 years ago, when these drawings were made by Lee Adams, there were few named types, and very few dates associated with particular shapes.  Archaeology as we know it was in it's infancy.  It's good to keep in mind that arrowhead typology is an ongoing scientific process, subject to change as knowledge increases.

How to talk about stone tool shapes!


This subject seems complicated when people throw around an abundance of technical terms, but really there isn't much to it.
Pre-historic time is divided into 5 stages, representing several thousand years:

The categories listed above are further sub divided into 3 stages, each representing several hundred years:

When artifacts from intact stratified sites are dug up in a controlled context archaeologists know the types buried deepest were deposited first and are older than those found above. Point types are placed along time lines based on the archaeological record.


This is a somewhat controversial time period, with some old-school archaeologist believing human occupation didn't exist in Missouri before Clovis times (13,900 years ago) and some newer evidence that suggest occupation going back 20,000 years or more; including possible pre-Clovis artifacts from the Big Eddy site in Cedar County, Missouri and the Shriver site in Davies County, Missouri.  Recently uncovered evidence from the Gault site in Texas makes the case for pre Clovis even more convincing than the Big Eddy site evidence. Below: Pre-clovis tools from Gault.

Paleoindians used mostly points with straight sides and no notches (called Lanceolate) from a fluted tradition. These flutes run from the base toward the tip, and thinned the point at the mounting location.

The Mastodon State Historic Site in Kimmswick, Missouri has produced Mastodon bones with Clovis points in association. This clearly establishes the earliest point type as contemporaneous with animal species that have been extinct for more than 10,000 years. BELOW: Kimmswick Clovis point, photo Lithics Casting Lab

The Folsom point (pictured below) is another Paleo type that developed from the Clovis. This point is in my opinion the peak of paleo stone projectiles. The way this point is mounted places the shaft almost all the way to the tip, this protects the point, and lessenst the chance of breakage during a hunt. The Folsom point is used in a hunt, resharpened afterward, and can be used many more times than a Clovis point. This longer lifespan probably justified the extra time and skill required to make Folsom points, whihc are fluted full length on both sides in many examples. 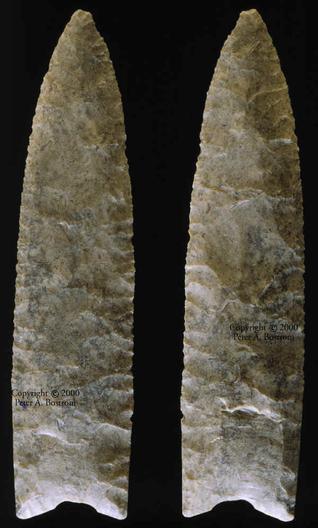 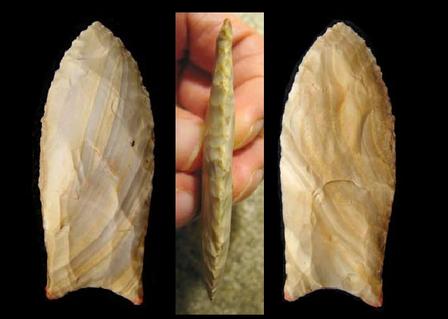 The HAFTING AREA (labeled HAFTING ELEMENT in the drawing to the left) is where the arrow shaft is attached to a stone point. In some (mostly older) point types the hafting area was ground smooth to keep sharp stone edges from cutting the sinew that wrapped the arrowhead and the shaft together. 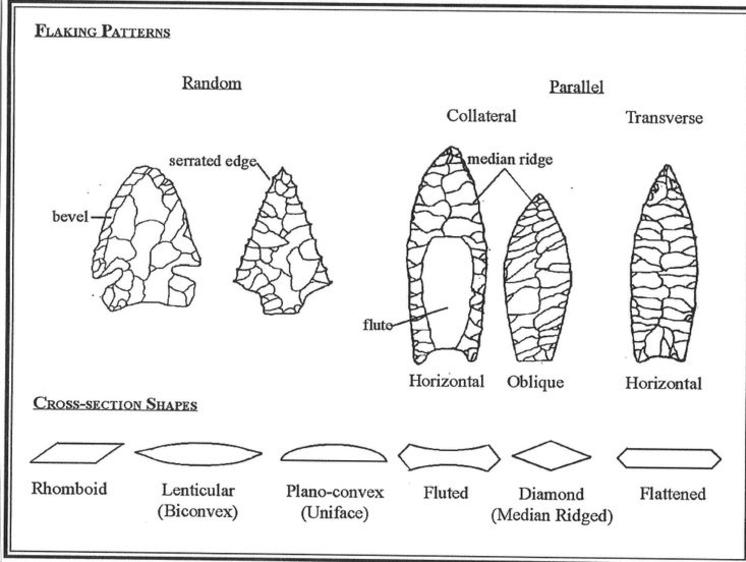 It's important to know whether or not the base and/or base edges of your point are ground smooth. This often indicates older point types and may be the single factor that determines the age of your find. LOOK at the smooth edges, FEEL them. You'll feel the difference between the sharp edges and the ground base... 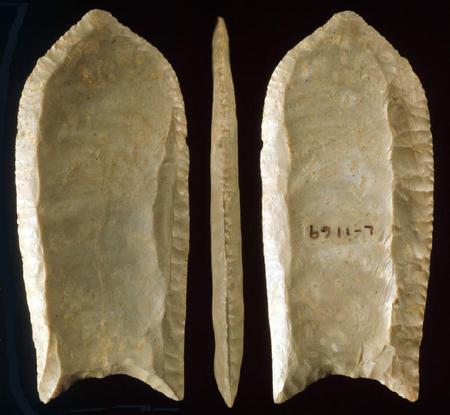 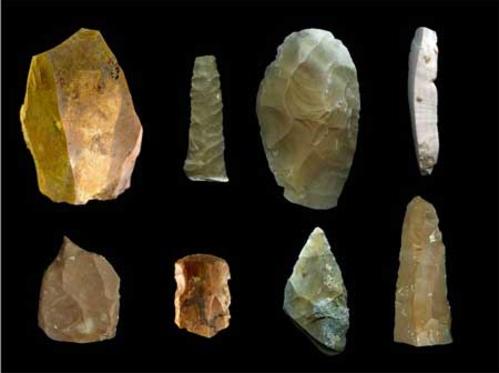 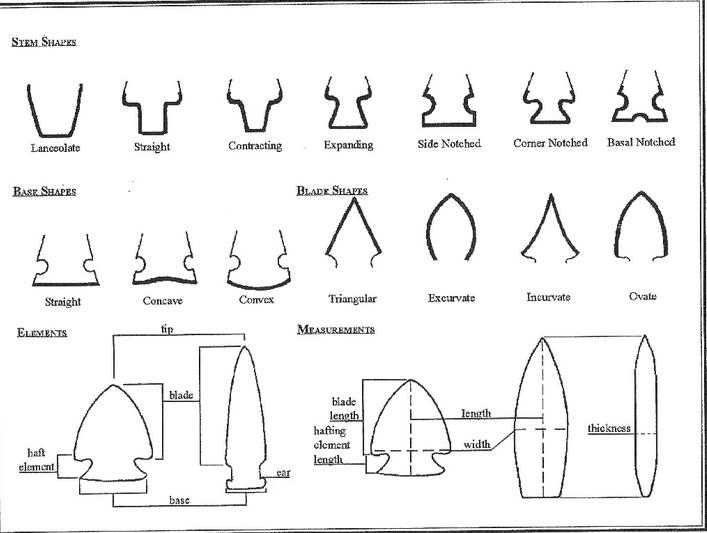 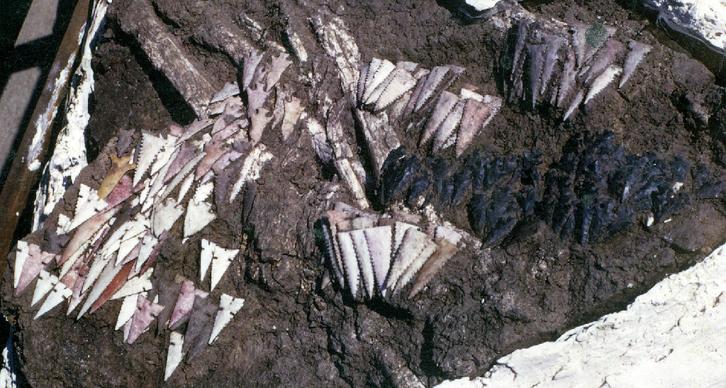 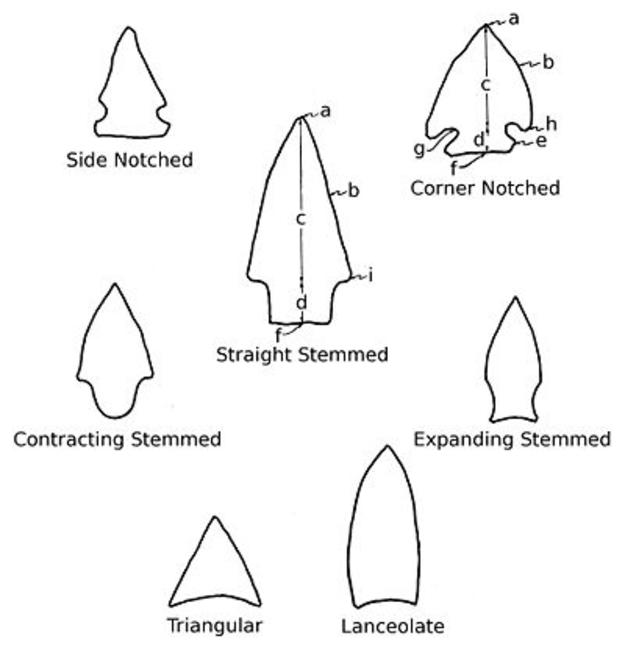